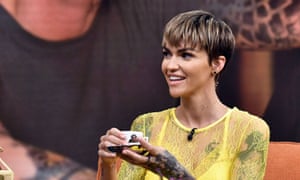 What a difference a few days make. Last week, we were cheering the decision to cast Ruby Rose as Batwoman, the first openly gay superhero to headline a TV series. Here was a small nugget of good news in a world that increasingly makes Gotham City look like Green Gables. As Rose, who is a gender-fluid lesbian, put it: “This is something I would have died to have seen on TV when I was a young member of the LGBT community who never felt represented on TV and felt alone and different.”

Fast-forward a few predictable social-media “discussions” and Rose has left Twitter amid the kind of backlash Batman would never face. According to the #RecastBatwoman hashtag, which Wide Awoke advises you not to bother checking out, Rose is the wrong choice because she is not Jewish, not a good enough actor, not lesbian enough … and on the misogyny-posing-as-fan-criticism goes. “When women and minorities join forces we are unstoppable,” Rose wrote before deleting her account. “When we tear each other down, it’s much more hurtful than from any group.”

Where to start? With the fact that measuring someone’s gayness according to how femme, butch or gender-fluid they might be is about as offensive as taking it upon yourself to decide whether a woman should wear, say, a burqa? No, screw it, let’s put on our cape and wade in to the cesspit of what constitutes true representation. “True” representation of the most literal, unattainable kind would mean a lesbian Jewish actor playing a lesbian Jewish superhero. But we don’t live in a world where there is an infinite pool of actors representing every minority under the sun. That doesn’t mean that being LGBT trumps being Jewish. It just means that when a character holds many different identities, attempting to cast one of them as accurately as possible is a good thing.

Hollywood continues to be a deeply conservative place where coming out doesn’t feel like an option. And the job of actors is, after all, to act. Which is why a gay actor can play a straight romantic lead, although as Rupert Everett has been saying for decades, Hollywood appears not to have received that memo. The problem is it never cuts both ways. Representation of LGBT+ people is still dire, and on the rare occasions when we do see ourselves reflected on screen, the characters are inevitably played by straight actors. Straight can play gay. Gay can play … well, who exactly? This is why people are justifiably angry about Disney casting Jack Whitehall, who is straight, to play its first openly gay character in The Jungle Cruise.

And it is why Rose being cast as Batwoman is a watershed moment. A lesbian playing a lesbian is not a prerequisite, but it is demonstrating some kickass representation when it happens. Which was never … until now.

How to save household budgets?

Danny Cipriani is unlikely to change, and why should he?