There is no shortcut to win, says one of the slogans on the walls of Vissel Kobe’s headquarters on the fourth floor of a nondescript building on a quiet stretch of the city’s harbour front. Signing Andrés Iniesta and his fellow World Cup-winner Lukas Podolski is a fairly big step in the right direction, however, for a team who had become used to mid-table finishes at best in the J League.

Temperatures in Japan were hot enough in August before a sizzling strike from Iniesta against Jubilo Iwata brought the house down. Four days later he did something similar against Tokyo, also in front of a full house. The former Barcelona player has not just been keeping defenders and journalists busy, his goals added significantly to the workload of Kobe’s business department. 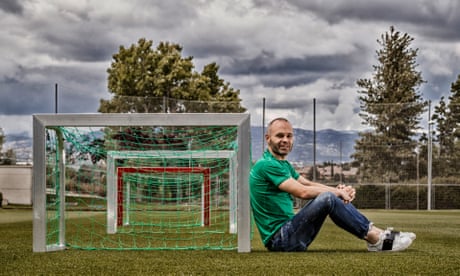 Andrés Iniesta: ‘I’ve squeezed out every drop, there’s nothing left’

“In a normal year Kobe sells 150,000 merchandise items but in the two weeks after Iniesta arrived in July we sold 50,000,” Masayuki Morii, Kobe’s business manager, says. “We didn’t have enough time to produce more but next year we will be ready. We want Kobe to become a big team.”

The target is the Japanese title in 2019 and the Asian Champions League a year later. “In the past we were around eighth but at least this year we have to be in the top three,” Morii adds.

That may not happen, despite Iniesta’s impact (Podolski has been hit-and-miss and injured since his arrival in 2017). Although the club were threatening a top-three challenge, inconsistent form has them down in seventh with nine games to play. If Iniesta cannot make enough of a difference this season, there are other ways in which he can help. “His teammates are very excited and they say how amazing he is,” Morii says. “Other players will want to come here, too. We don’t know if more big names are on the way but we know we have to make use of Iniesta while he is here.”

The same is true off the pitch, where Kobe are equally ambitious. “We have to get more fans, extend the stadium so that after he leaves we can maintain a high level,” Morii says. “We have been learning about this kind of football management from Barcelona.”

The reason Barcelona have been helping out is because of Rakuten. The Japanese e-commerce titan is the shirt sponsor of the Catalan club but the company, founded by the Kobe native and multibillionaire Hiroshi Mikitani, has been active in Japanese sports for longer, owning a baseball team, Tohoku Rakuten Golden Eagles, and, from 2014, Kobe, who it also sponsors. The club are on the fourth floor; Rakuten on the eighth. The lift gets plenty of use.

This is the first time a Japanese football team have been used, at least in part, for international branding, following a number of Chinese companies that have got involved in the game in recent years in order to further their fortunes, whether political, business or both. It is partly thanks to the rise of the Chinese Super League that Kobe can say there is no jealousy from the traditional giants of Japanese football. “We think that the big teams have a favourable view of our spending,” Morii says. “We have brought big players to Japan.”

It is debatable whether the recruitment of big-name players that started in China in 2011 has taken the Chinese league ahead of its Japanese rival in terms of quality but there is no doubt that when it came to the respective brands, profiles and attendances, the J League was being left behind by its neighbour. 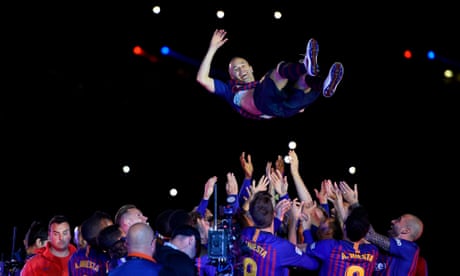 China’s rise came when the J League, established in 1993, had hit something of a plateau. The standard of imports fell, with the same true of the coaches. Attendances had also levelled out at around 17,000 to 18,000. The departure of talented Japanese players to Europe at ever-younger ages did not help. It had all gone a little flat. Yet just as the Chinese government started to rein in the spending in 2017, Japan received a significant boost. Domestic online broadcasting rights for the next decade were sold for $2bn. It was a significant vote of confidence in the J League and an important outside revenue source. The arrival of Fernando Torres at Sagan Tosu this summer showed that even the most unfashionable clubs could splash cash.

The J League has been trying to improve its popularity around Asia, signing numerous partnerships with federations and broadcasters, especially in the southeastern region. At first there was little interest. Without their own players to follow, fans in Indonesia, Vietnam or Malaysia were not going to watch; although some local stars headed north, none made an impact.

This season, however, there are three Thailand internationals performing well in Japan’s league. Their exploits are followed closely back home, where there is great pride that one, Theerathon Bunmathan, counts a certain Spanish World Cup winner as a teammate in Kobe.

Now the challenge is helping Iniesta spread that popularity elsewhere. There may not be a short cut to success, but if anyone can find a way through, it is that man.

White House in turmoil: a tumultuous 24 hours – even by Trump standards