For some, after a record summer heatwave and wildfires in the Arctic, it was about the environment. For others, it was about defending liberal democracy in a country taking a first step towards abandoning it.

For many – more, certainly, than in any previous Swedish election – it was above all about frustration and a desire for radical change.

“I want to stir up the stew,” said Fredrik Sigleifs, 23, casting his ballot for the anti-immigration Sweden Democrats in the town art gallery in Sjöbo, just over 30 miles (50km) west of the southern city of Malmö, in a constituency where the populist party won 30% of the vote in the 2014 elections. “It’s been the same shit now for as long as you can think.”

Sigleifs was sceptical, however, that the Sweden Democrats would win any real influence over government, even if a fifth of the electorate voted for them. “I think the other parties will work together to hold them outside,” he said.

Outside the Hedvig Eleonora school in the properous Stockholm neighbourhood of Östermalm, Gabriel Kroon, 21, expressed the same concern. “The only question about this election is whether the other parties will work with us after it,” he said.

Sporting an SD2018 teeshirt, Kroon, who is standing for the party in council elections, said it was “making good progress” even in middle class, urban areas such as Östermalm, where it is hoping for a solid 10-12% of the vote. “We’ll get there,” he said. “If not this time, then next time. They can’t ignore this many voters for ever.”

Nearly 300 miles away to the south-west, in Biskopsgården, a suburb of Gothenburg that was the scene of a gangland shooting in 2015 andthe killing of a British child with a hand grenade in 2016, Eric, 42, said he was voting “for historic change”. 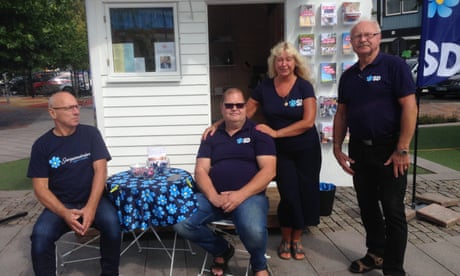 Sweden, he said, “can be Sweden again, a Nordic country. People who pay taxes should get the benefit of them, not others. The other parties, they’re saying. Saying, and not doing. I’m not so much about left or right. I just want change. It should be more like Hungary and Austria. The values we grew up with are not the values today.”

Frank Bernardsson, 52, was similarly angry, and voting Sweden Democrat for similar reasons. He said: “There was a shooting right here, last night. This government is doing nothing. I don’t mind if criminals only shoot at each other but if I happen to be in the middle, it can hit me. It’s calmer now, but still scary to live here.”

Elsewhere, some blamed mainstream politicians. “The Sweden Democrats are a protest party; they wouldn’t have needed to exist if politics had been done in another way,” said Emil Nilsson, 37, in Sjöbo, hugging his eight-year-old daughter Maria. “You can get upset about them and you say bad things about their supporters, but they are a result of bad politics.”

Others, however, see real danger in the far-right party’s rise. Admir Shkodra, 32, who came to Sjöbo from Kosovo in the 1990s, said he was voting for the centre-left Social Democrats, the party of outgoing prime minister Stefan Löfven: “I don’t want to vote myself out of the country,” he said. “I have a little daughter I have to think about, with a foreign parent and a Swedish one.”

Aminat Iakubova, 48, who came to Sweden from Chechnya in 2002, said this was the first time she had felt she really had to vote. “I hadn’t read so much about them before,” she said of the Sweden Democrats. “I thought my vote didn’t mean much, but this time I thought I must.”

In Stockholm, Harry Klagsbrun and his partner, Marina Szugalski, who both voted for the liberal Centre party, also felt this election was about the defence of liberal democracy. “One that takes into account the needs and the views of everyone, including minorities,” said Klagsbrun, who works in banking.

Szugalski said: “It’s really dangerous not to understand what you’re actually voting for if you vote Sweden Democrat. But I think people are starting to see we are standing on the edge of a very slippery slope right now.”

Mikaela Lundh, 28, was equally forceful. A centre-right Moderate party supporter, she said this year’s vote “feels way, way more important than previous elections. This really feels like a critical moment for this country”.

While the Sweden Democrats would not enter government however well they did, with neither the established centre-right or centre-left blocs in with a chance of parliamentary majority, a strong showing would give the far-right party the power to block legislation in parliament.

Children in India might be the future of religious tolerance