Mauricio Pochettino could not contain the frustration. The Tottenham manager had spent much of the time since last Monday’s 3-0 win at Manchester United warning his players that they could not be taken in by the result.

There was a difference, he said, between the perception that Spurs were flying and the reality that they could just as easily have lost at Old Trafford. They had not played well in the first half. The bottom line was that they had to impose themselves from the first whistle against Watford and remain strong throughout.

The message rang hollow after Spurs played, to quote Pochettino, as if the first half were a “friendly” and, after they had been handed the boost of a freakish Abdoulaye Doucouré own goal, they proceeded to snatch defeat from the jaws of victory.

In short, as Pochettino made clear, Tottenham cannot be considered as Premier League title contenders on this evidence.

His angst was Watford’s joy. They had been even worse in the first half, having attempted to match their better-heeled rivals in footballing terms. But they found the fire in their bellies after they fell behind. They bullied Tottenham on a couple of José Holebas set pieces, with first Troy Deeney and then Craig Cathcart meting out the punishment with fine headers.

To the delight of Elton John, who sat in the posh seats, and every one of their other supporters, it was Watford rather than Tottenham who maintained their 100% start to the season. It is four wins out of four for them in the league and, for the first time since 1987, Watford triumphed in this fixture.

“We need to show more respect to this competition and compete much, much better. It’s difficult for me to understand. It was very painful. I think it’s a good wake-up call for everyone.”

Watford’s best-ever start to a top-flight campaign goes on and they will now have the international break to bask in what they have achieved. Having beaten Brighton, Burnley and Crystal Palace, they knew that Tottenham would represent a test from a higher level. Despite being below their best until the Doucouré blunder, they passed it.

“We just went away from our game,” Deeney said. “We tried to out-football them and made silly mistakes. But we cause people problems, we are big lumps and people don’t like it.”

Deeney is one of the biggest lumps and he helped to spark Watford after the own goal. Having won a shuddering shoulder-to-shoulder challenge with Davinson Sánchez, he crossed and Toby Alderweireld’s diving header back across his own goal beat Michel Vorm only to come back off the top of the far post.

Watford sensed there was something in this for them and their goals were marked by more than Holebas’s fiendish delivery from first a free-kick and then a corner. Deeney and Cathcart simply wanted it more than their markers who, it had to be said, resembled a sorry bunch. 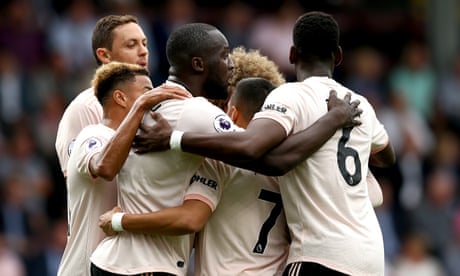 The first half was dull, with Tottenham in control but never truly stretching Watford, despite the occasional flickers from Lucas Moura and Dele Alli. The latter looped a header off target after fastening on to a high Alderweireld ball, with Ben Foster off his line, while he also threatened when Christian Eriksen whipped in a cross following a short free-kick routine. Alli touched wide and he was relieved when the offside flag went up.

There was just one shot on target before the interval and it was entirely reflective that it was a tame pea-roller from Deeney in stoppage time. He had earlier headed over from Daryl Janmaat’s cross.

The breakthrough goal followed an Alli chip into the box and a poor clearing header from the otherwise impressive Christian Kabasele. It reached only Lucas on the right and what followed seemed to unfold in slow motion. His cross was cut slightly backwards of square; it thumped into Doucouré, who was running back to goal, and spun inside the near post, agonisingly out of Foster’s reach.

Watford roused themselves in spectacular fashion, igniting the atmosphere in the process. Andre Gray snatched at an opening from the edge of the area and, after Kabasele had cut out a low Harry Kane cross with Lucas in space behind him, Watford drove the comeback.

Tottenham almost snatched a draw at the end when Kane hung in the air to meet Kieran Trippier’s cross only to head high. It was not Kane’s day. Nor was it Tottenham’s.

Who’s the bigger Russian agent, Boris Johnson or Jeremy Corbyn? Depends who (and when) you ask!