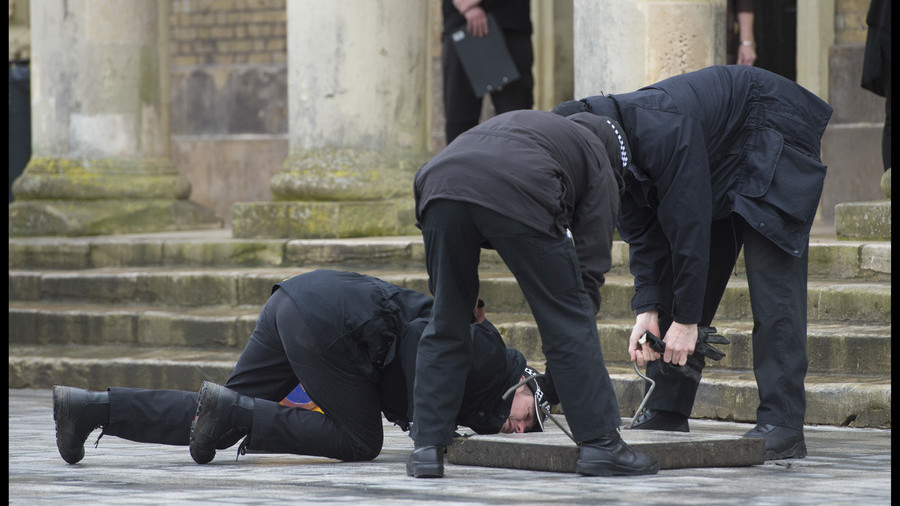 FILE PHOTO. Police perform a search of drains outside of Salisbury Guildhall ahead of the visit of the UK PM Theresa May. © Ben Stevens / Global Look Press
The Skripal saga has given fertile ground for media speculations and for a string of new anti-Russia sanctions, while the probe failed to yield any evidence in five months, Russian envoy to the UK Alexander Yakovenko told RT.

“The next day after the incident in Salisbury, Prime Minister Theresa May immediately blamed Russia for doing this. Five months past that time – and we don’t have any evidence, and the British authorities are refusing to talk to us,” Yakovenko told Afshin Rattansi, host of RT’s Going Underground show. 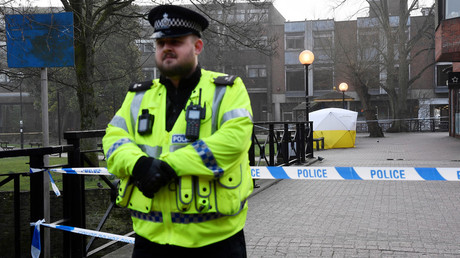 London has repeatedly prevented Russia from contacting its citizens, which constitutes a blatant violation of the Vienna convention on consular relations, the ambassador said. Lack of access to the former double agent Sergei Skripal and his daughter Yulia raises concerns over their health and living conditions, as well as whether they are being held forcibly by the British authorities, he said.

Meanwhile, the British media have produced some 100 theories on what exactly happened in Salisbury back in March, widely citing various anonymous leaks – but no real evidence has been brought up, Yakovenko said.

He argued that as the time passes, even the main “arguments” of the UK authorities, which were supposed to back the bold accusations, have seemingly fallen apart. While London alleged that only Moscow had capabilities to produce Novichok class nerve agents, that turned out not to be the case, the ambassador said, citing revelations made by the Czech President Milos Zeman back in May.

“If you read the German press you will find that most of the labs in Europe are capable of producing chemical weapons in small quantities. So basically the major argument of the British government that only Russia is capable of producing this kind of poisons is simply not correct,” Yakovenko said.

He stressed that Russia has “never produced” and “never developed” the Soviet-designed Novichok nerve agent and eliminated its chemical weaponry stockpile in October last year – which was confirmed by the Organization for the Prohibition of Chemical Weapons (OPCW).

The recent UK push to empower the OPWC to assign blame for chemical attacks has done more harm than good, Yakovenko noted, and Moscow continues to oppose it. The OPCW’s job is to collect evidence and provide expert analysis on the chemicals themselves, while determining the perpetrators is the “prerogative of the UN Security Council,”Yakovenko said. The UK’s initiative, in its turn, only disrupts the work of the two internation

Americans have amassed a record $13.2 trillion in debt, but economists aren’t that worried about it