The candidate has spent over half a billion dollars remaking the 2020 primary in his own image, seeking to accomplish with sheer brute financial force what others must finesse by appealing to voters on the issues they care about. Even Trump, who has arguably redefined the Republican Party in 2016 with a largely self-funded effort, secured his party’s nomination as much with showmanship as with bottomless pockets.

But so far, if polls are to be believed, Bloomberg’s plan is working – despite never setting foot on a debate stage, he has surpassed double digits in some state polls. Tuesday’s NPR/PBS NewsHour/Marist poll has him running an improbable second with 19 percent of the vote.

ALSO ON RT.COMNo, YOU are Trump’s buddy! Bernie and Bloomberg go at each otherThe Bloomberg campaign’s salvo declaring Trump “Bernie’s latest bro” on Monday was a clear act of calculation – already, the tycoon’s enemies on the Left are pointing out where he, not Sanders, resembles Trump, and there’s a lot of material to work with. Like his politically-promiscuous rival, who donated to the Clintons before running against Hillary, Bloomberg often gloats that his vast personal fortune means he need not answer to the whims of donors. But the implication is that he’s not bound by the wishes of voters either, only occasionally making a token concession that stands out all the more for its inauthenticity. From plagiarizing telling chunks of his platform to papering over a track record as mayor of New York City that would spell electoral doom for any other Democrat, Bloomberg has shown precious little respect for the people he presumably wants to vote for him.

Democrats have complained Trump is racist since day one – a “white supremacist,” even – but that leaves little room on the ideological scale for Bloomberg, who wore his bigotry proudly until a few months ago (Sanders doesn’t even register on this scale). Bloomberg hasn’t just suggested photocopying the description of “young black male, 16-25 years old” and handing it out to cops so they can “throw them against the wall” in a government-sanctioned racist harassment program.

At its peak, stopping more than half a million mostly-black and -Latino men every year, these unconstitutional stops yielded guns just 0.1 percent of the time. His “private army” didn’t just form a unit dedicated to spying on Muslims that never generated a single lead, let alone foiled a terror plot, then pretend that unit didn’t exist. Centrist think tank Center for American Progress also memory-holed all mention of that program from its literature on Islamophobia in the US in 2015, after Bloomberg had given over $1.5 million to the group, and it isn’t the only organization to quietly set aside its principles for some of those sweet, sweet Bloomberg bucks.

ALSO ON RT.COM‘A TOTAL RACIST’: Trump helps ‘cancel’ Bloomberg on Twitter after leaked audio blaming minorities for ‘95% of murders’Bloomberg didn’t just blame the 2008 financial crisis on the end of “redlining,” a now-illegal policy of denying bank loans to individuals living in predominantly black neighborhoods. He also opposed raising the minimum wage, expanding access to affordable housing, and other common-sense measures to help Americans climb out of poverty, eviscerated public-sector unions and reworked zoning laws to maximize the construction of the luxury condos that have cannibalized New York’s housing stock. Calling the city a “luxury product,” he presided over an 83 percent spike in homelessness that he “solved” by giving street-bound families one-way bus tickets out of town.

Indeed, while money has insulated Bloomberg from the need to interact with his fellow man on a level of basic civility, his history with women makes Trump’s crude references to grabbing genitalia look like playground banter. Bloomberg’s company has been sued by 64 employees for discrimination and harassment over the past 20 years, a fact his campaign has tried to spin as par for the course for any large corporation. One woman sued Bloomberg for maintaining a “hostile work environment of persistent sexual harassment” in 1995 culminating in Bloomberg himself telling her to “kill it!” upon learning of her pregnancy. After repeating the command, he allegedly walked away muttering “Number 16!” in disgust, apparently referring to the number of mothers-to-be then in his employ. While Bloomberg denied that particular utterance, the case was settled out of court and the former employee legally silenced. At least one witness backed the “kill it” story to the Washington Post earlier this month, however.

Bloomberg explaining how healthcare will “bankrupt us,” unless we deny care to the elderly.

“If you show up with cancer & you’re 95 years old, we should say…there’s no cure, we can’t do anything.

A young person, we should do something. Society’s not willing to do that, yet.”

23.3K people are talking about this

Somehow, Emily’s List – a political action committee that claims to advocate for women’s issues – has taken $6 million from the man anyway. Meanwhile, Bloomberg’s idea of comforting a grieving Jewish family was to try to explain the financial futility of keeping ailing elderly relatives alive, compared to the young.

As more than a few commentators have pointed out, Bloomberg talks and acts like an offensive caricature of a billionaire – something like the Simpsons’ Mr. Burns meets a Christmas Carol’s Scrooge (minus the latter’s famous stinginess). He has said something to offend literally every group outside the 0.1 percent, from young minorities who “don’t know how to behave in the workplace” to farmers (“you dig a hole, you put a seed in, you put dirt on top…you could learn that”). And his apparent disgust for the poor is tempered by a grating paternalism that led him to levy massive taxes first on cigarettes and later, in a failed campaign that became synonymous with “nanny state” overreach, on soda.

With Michael Bloomberg trying to buy the presidency, this video is more relevant than ever @RaniaKhalek

436 people are talking about this

In his distorted view of the obesity crisis, the poor simply don’t know chugging high fructose corn syrup will make them fat, any more than they knew sucking down cigarettes will give them cancer, and informing them (or expanding access to healthy food) is a waste of breath. Bloomberg even insisted an asthma epidemic in public housing was due not to atrocious building maintenance (his administration also stopped checking for lead), but poor hygiene, suggesting that a crash course in cleaning techniques for parents would clear it right up. 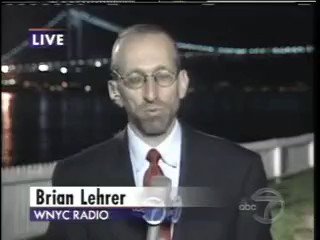 547 people are talking about this

It’s no surprise, then, that he believes his money can buy the Democratic primary. Despite outspending his third-term rival in the New York mayoral race 19 to 1, he nearly lost, as voters made their weariness with his rule by fiat clear. Instead, however, the lesson he took away from that race appears to have been that it’s better to spend more to win than risk losing. Bloomberg has poured over $400 million into broadcast, radio, and cable ads alone (plus tens of millions more on Facebook and Google), accounting for more than three quarters of total primary spending, and he feels he’s owed something for his money. With a donation of just $300,000 to the DNC, he has convinced that famously stubborn group to allow him on the debate stage, and he’s been able to buy loyalty from representatives of communities he’s clashed with in the past. Where that loyalty has not been for sale, he’s reportedly exacted revenge – but few, it seems, refuse to sell.

If Bloomberg can’t buy your endorsement he will falsely call you a Bernie supporter and put you in an ad about people being rude on twitter https://twitter.com/hollyotterbein/status/1229410648913797122 …

A group referenced in Mike Bloomberg’s “Bernie Bros” video, New York Communities for Change, says it hasn’t endorsed a 2020 candidate. The group was featured positively in a Bloomberg ad in Nov., until it complained that he wasn’t part of its movement & the campaign took it down. 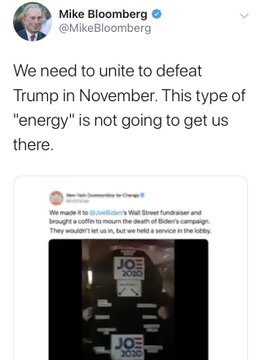 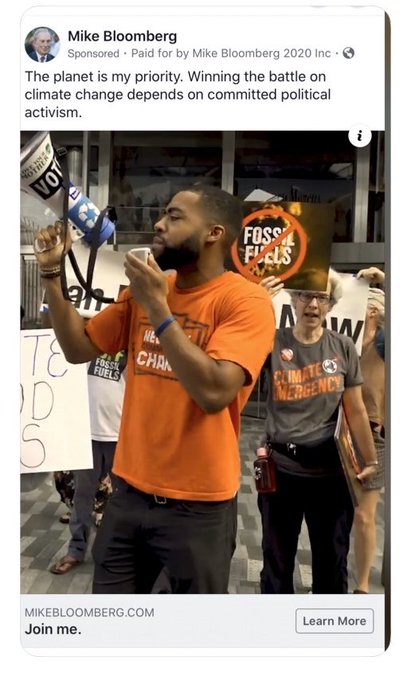 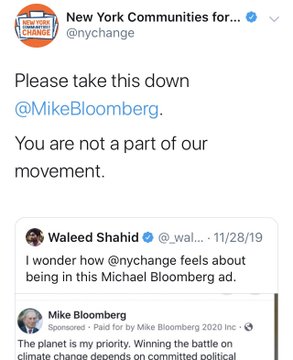 1,470 people are talking about this

Bloomberg’s policies offer more of the same neoliberal austerity as his centrist predecessors, with a side of gun control and a creeping technocratic paternalism. He has all of Trump’s negatives and none of his saving graces. To Democrats, these are Trump’s braggadocio and lack of decorum, which prevent him from implementing the worst parts of his program; to Republicans, it’s Trump’s patriotism and common touch that are both inarguably missing from Bloomberg. The pair may golf together, but Trump can go out and talk to the MAGA-hatted masses afterwards. Bloomberg has no interest in what the masses think – of him, or of anything else. One day, if he has his way, they will all behave.

3,785 people are talking about this

The statements, views and opinions expressed in this column are solely those of the author and do not necessarily represent those of RT.