Get short URL
A smoke rises from a port of Tripoli after being attacked in Tripoli, Libya February 18, 2020 © REUTERS/Ahmed Elumami
Follow RT on

A media arm of the Libyan National Army (LNA) has said their forces targeted a cargo vessel that ferried ammunition and weapons from Turkey to the embattled port of Tripoli, where the UN-backed government is headquartered.

“The Turkish ship loaded with weapons and ammunition that docked this morning at the port of Tripoli was destroyed,” reads a short statement published by an LNA Facebook account. It didn’t elaborate on the attack, which appears to have taken place on Tuesday afternoon.

However, Brigadier Khaled Al Mahjoub of the LNA told Al-Arabiya that the vessel had arrived in violation of an arms embargo and was carrying weapons for armed militias.

Ghassan Salame, UN envoy for Libya, also confirmed that the Tripoli port was attacked, lamenting that “the truce is very fragile.”
He was optimistic, however, that “nobody has so far reneged on the principle of accepting the truce and the political process is trying to find a way to move forward.”

Pictures that emerged on social media later in the day show plumes of smoke billowing from the Tripoli harbor. 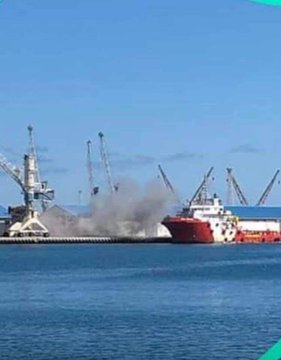 Led by General Khalifa Haftar, LNA forces seized control of most of Libya, and at one point threatened to capture Tripoli. Haftar’s advance raised angered Turkey which backs forces loyal to the Government of National Accord (GNА).Turkish President Recep Tayyip Erdogan previously vowed to teach Haftar “a lesson,” then promised to deploy troops to the war-ravaged country. However, he later said Ankara sent a group of “advisers” instead of a full-fledged fighting force.

Meanwhile, the GNA itself seems to be wary of Turkish intervention; Foreign Minister Abdul Hadi Al-Hweij said on Monday that Erdogan is “the farthest from a peaceful settlement” of all those involved.“This is obviously not a Turkish interference, but an aggression. It’s a new attempt by Turks to conquer Libya,” the official stated.

The GNA has been engaged in a prolonged conflict with the Tobruk-based LNA. The archfoes managed to agree to a fragile ceasefire at a recent conference in Berlin. It still remains in place, but no binding agreement has yet been signed. Haftar held a meeting with GNA leader Fayez al-Sarraj in Moscow, set up by Russia’s Foreign Ministry, last month.

ALSO ON RT.COM‘A month or 2 ago nobody thought it could happen’: Moscow hosts talks between Libya’s rival parties in hopes of ending civil warAlthough the warring sides failed to come to an agreement, world powers and international organizations welcomed the Russian peace initiative.