The US Justice Department has reconsidered its recommendation that former Trump advisor Roger Stone serve nine years in prison for lying to Congress, instead deferring to the court, while four of its prosecutors have resigned.

Punishing the self-described “dirty trickster” with seven to nine years in prison “could be considered excessive and unwarranted,” prosecutors said in a statement on Tuesday. “Ultimately, the government defers to the Court as to what specific sentence is appropriate.”

Wow, Mueller prosecutor Zelinsky withdraws from the Stone case AND includes this footnote(!): 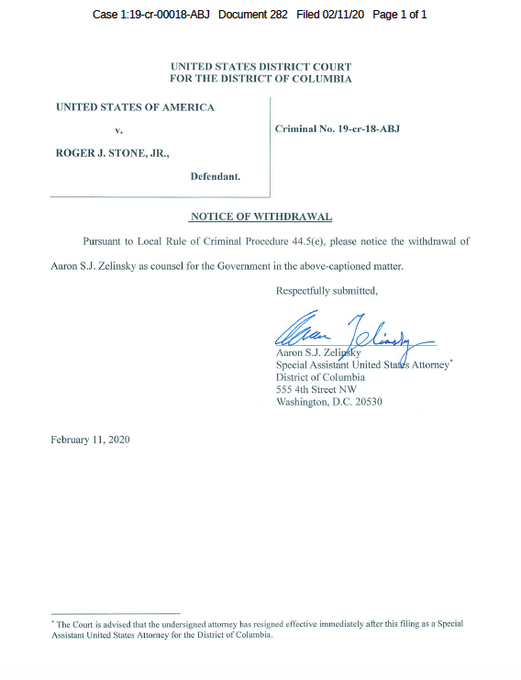 3,121 people are talking about this

As the report emerged, news broke that lead attorney for the government, Aaron Zelinsky, had withdrawn from the case. What’s more, a footnote on the filing revealed Zelinsky had not only resigned from the Stone case, but also entirely from his post as Special Assistant US Attorney for the District of Columbia.

Another Justice Department source told Fox News that “the sentencing recommendation was not what had been briefed to the Department” – their claim suggesting the prosecutor might have misrepresented the sentence he planned to recommend.

DOJ Prosecutor Jonathan Kravis has “resigned as an Assistant US Attorney” 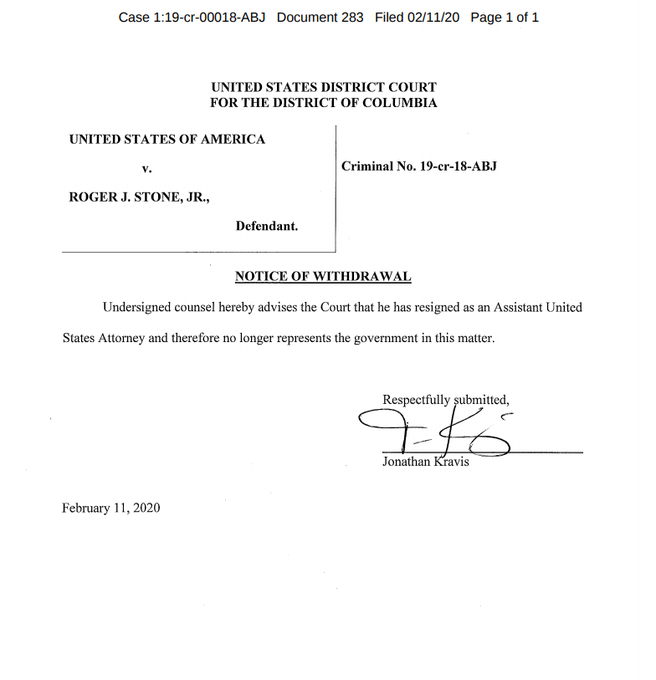 1,957 people are talking about this

Later on Tuesday afternoon, Assistant US Attorney Jonathan Kravis also announced his resignation from both the case and his job at the DOJ. US attorneys Adam Jed and Michael Marando also withdrew themselves from the case, according to separate court filings revealed on Tuesday.

Shortly after the resignations were announced, Trump took a swipe at the prosecutors, suggesting they were “Mueller people” who “cut and ran after being exposed for recommending” what he described as a “ridiculous 9 year prison sentence” to Stone. In line with his previous statements, Trump slammed the collusion probe as “the Mueller Scam,” arguing that his former adviser “got caught up in an investigation that was illegal.”

Who are the four prosecutors (Mueller people?) who cut and ran after being exposed for recommending a ridiculous 9 year prison sentence to a man that got caught up in an investigation that was illegal, the Mueller Scam, and shouldn’t ever even have started? 13 Angry Democrats?

44.2K people are talking about this

Prosecutors had declared in a Monday filing that Stone “displayed contempt for this Court and the rule of law” when his ‘crimes’ – lying under oath, witness tampering, and obstructing Congress’ investigation into alleged Russian interference in the 2016 election – came to light. The Republican operative’s harsh sentence should serve as “general deterrence” for the “deadly adversary” represented by “foreign election interference,” the memo advised, insisting he serve as a reminder that “our democratic processes can function only if those called to testify tell the truth, and…serious consequences lie in store for those who do not.”

Stone’s defense argued that 15 to 21 months was more typical given the offenses, observing that the campaign adviser had played no role in obtaining the emails stolen from the Democratic National Committee or Hillary Clinton campaign manager John Podesta and provided to WikiLeaks, nor had the probe yielded evidence of the promised “collusion” between the Trump campaign and Russia. Stone himself filed a request with the court to avoid prison altogether, and even the witness he supposedly intimidated – comedian Randy Credico – asked that he only be sentenced to probation, admitting he did not actually feel physically threatened by Stone’s “threats.”

This is a horrible and very unfair situation. The real crimes were on the other side, as nothing happens to them. Cannot allow this miscarriage of justice! https://twitter.com/ChuckRossDC/status/1227016256227807232 …

Prosecutors recommend up to NINE YEARS in prison for Roger Stone.

They call foreign election interference a “deadly adversary” even though Stone was never accused of working with Russians or WikiLeaks. https://dailycaller.com/2020/02/10/prosecutors-nine-years-prison-roger-stone/ …

52.5K people are talking about this

But it was Trump’s Twitter plea, calling out the “horrible and very unfair situation” in which his former campaign ally had found himself, that got Stone’s plight trending among the #MAGA contingent.

265 people are talking about this

If #RogerStone goes to jail & Brennan, Clapper, Comey, Strzok and Page are still roaming free, that is a breach of the public trust and an injustice that cannot be ignored.

The blatant bias against Trump supporters is displayed for the world to see.#PardonRogerStone

809 people are talking about this

The apparent DOJ reversal hours later, unsurprisingly, set off its own firestorm.

We are officially a f*cking banana republic!
“The statement came hours after President Trump tweeted of the sentence prosecutors recommended, “This is a horrible and very unfair situation.”” https://www.washingtonpost.com/national-security/justice-dept-to-reduce-sentencing-recommendation-for-trump-associate-roger-stone-official-says-after-president-calls-it-unfair/2020/02/11/ad81fd36-4cf0-11ea-bf44-f5043eb3918a_story.html …

The resignations could plunge the department into political crisis over its independence.

1,479 people are talking about this

Condolences to the career professionals at DOJ whose independence and professional integrity have been publicly undermined to suit the whims of the WH. Truly a cancer on our system of justice. https://www.washingtonpost.com/national-security/justice-dept-to-reduce-sentencing-recommendation-for-trump-associate-roger-stone-official-says-after-president-calls-it-unfair/2020/02/11/ad81fd36-4cf0-11ea-bf44-f5043eb3918a_story.html …

1,401 people are talking about this

Trump later told reporters he did not ask the Justice Department to change Stone’s sentencing recommendation, though he maintained it was within his authority to do so. He doubled down on his objection to the initial sentence, calling it “ridiculous.”

Stone was found guilty in November of seven counts related to interference with the Congressional ‘Russiagate’ probe and is scheduled to be sentenced next week.