Get short URL
Rescue workers clear a snow-covered road to make way for an ambulance to reach the areas affected by heavy snowfall and avalanches, in Neelum Valley near line of control (LoC), Pakistan, January 14, 2020. © REUTERS/Naseer Chaudary
Follow RT on

PM Khan has called for immediate assistance to be provided to Pakistan-administrated Kashmir, which is the most affected as severe winter weather continues to grip the country.

Pakistani Prime Minister Imran Khan tweeted that he has asked for immediate humanitarian assistance to be provided to those suffering in Pakistan-controlled Kashmir, as snowfalls and landslides have caused “misery & deaths” there.

The severe snowfalls and landslides in AJK have caused misery & deaths. I have asked the NDMA, the military & all our federal ministers to immediately provide all humanitarian assistance on an emergency footing to the affected people in AJK.

4,949 people are talking about this

A spell of harsh weather has so far claimed over 60 lives in the region, Pakistani media reported, citing officials. More than 50 people have been rescued, but authorities say the suffering is far from over, as another heavy snowfall is expected this Friday.

The recent snow fall in Neelum AJK.
People of local community trying there best to save the injured 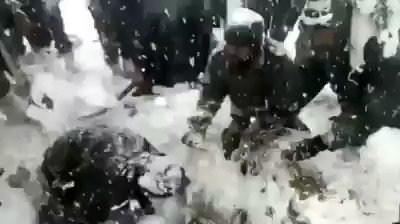 Another hard-hit region is Pakistan’s Balochistan province, where at least 30 people have lost their lives – according to officials cited by the media, most of them are women and children. Hundreds remain stranded.

At least seven people were also killed across Punjab region. The heavy snowfall has clogged the roads, bringing life in the affected parts of the country to a standstill, trapping residents and damaging dozens of homes.

Today a painful day in Neelum Valley AJK. more than 50 people were died in Neelum valley yesterday due to snow falling, land sliding and glaciers. The whole valley is choking.

27 people are talking about this

There are fears that the death toll may climb even further since rescuers and relief workers have not been able to reach remote areas buried in snow, with the roads still blocked.

‘Thank you, Mr. President!’: Trump thanks himself for making US top energy producer