The British House of Commons has voted in favor of debating a motion to take the no-deal Brexit off the table and asking the EU for an extension. PM Boris Johnson has declared he will call a general election if the motion passes.

Sponsored by Labour MP Hilary Benn and backed by a number of defectors from Johnson’s Conservative party like Oliver Letwin, the motion sailed through the Commons with a vote of 328 to 301 on Tuesday evening.

“Let there be no doubt about the consequences,” Johnson told the MPs after the result was announced, accusing the Parliament of being “on the brink of wrecking any deal” with Brussels by taking the possibility of unilateral Brexit off the table.

Today’s vote allows MP to take control of the order paper & prevent Boris Johnson from forcing a no deal Brexit.

My constituents elected me to represent them which means stopping no deal which will be extremely damaging to the Highlands, Scotland and the whole UK. #StopTheCoup

If Benn’s motion gets approved on Wednesday, Johnson warned, he would call a general election for a new Parliament.

When this passes, Ollie Letwin and Hilary Benn will have installed themselves as the head of a shadow executive, without an election.
They will control the house, and thereby render the Executive largely superfluous. https://twitter.com/cgwOMT/status/1168838542350540800 … 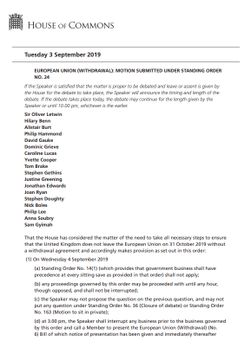 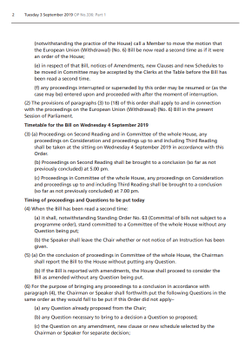 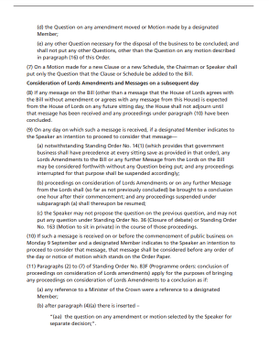 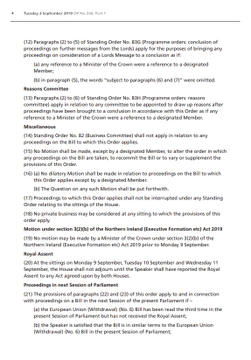 24 people are talking about this

“There is no consent in this House to leave the EU without a deal,” Labour leader Jeremy Corbyn countered. “There is no majority for no-deal in the country.”

He said he would be fine with a general election, but only after the Commons passes the motion taking a no-deal Brexit off the table.

ALSO ON RT.COM‘Surrender bill’ vs ‘Trump’s mercy’: Johnson and Corbyn clash ahead of vote on no-deal BrexitJohnson has pushed for the possibility of a no-deal Brexit ever since becoming PM in July, replacing Theresa May who resigned over her inability to deliver on a negotiated withdrawal. Yet he has faced a rebellion within the Tory ranks that on Tuesday eliminated his one-MP majority.

Tuesday’s rebellion was led by Sir Oliver Letwin, who co-sponsored the motion with Benn, and backed by a number of prominent former cabinet ministers, such as Phillip Hammond (Exchequer), Greg Clark (Business), David Gauke (Justice), and Justine Greening (Education).

(soon to be ex?) Con MPs who voted in favour:

Johnson has threatened to expel the 21 Tories who voted for Tuesday night’s motion, though that would leave him with a parliamentary minority. There were rumors after the vote that the “rebels” would be given a chance to stay in the party if they voted against blocking the no-deal motion on Wednesday, though Johnson has not officially confirmed either course of action.

The deadline given by Brussels for Britain’s departure from the EU was October 31, with a deal or without. If Benn and Letwin’s motion is approved, that would be extended to January 31.

ALSO ON RT.COMBoJo’s government majority destroyed as Tory MP defects to Lib DemsLike this story? Share it with a friend!