Google appears to have maintained a ‘blacklist’ for dozens of websites on one of its mobile apps, as well as a ‘fringe ranking’ system that scored sites for “quality,” according to documents leaked by a company insider.

Published on Wednesday in a report by conservative transparency group Project Veritas, the documents appear to include hundreds of pages of technical details describing Google’s behind-the-scenes projects, as well as internal communications between employees.

One of the documents includes “news black list site for google now.”

1,479 people are talking about this

The insider, Zachary Vorhies, told Project Veritas he spent over a year collecting the documents – noting they were available for any full-time employee to see – and said he feared the American “election system was going to be compromised forever” by Google’s control of the flow of information online.

“I saw something dark and nefarious going on with the company and I realized that they were going to not only tamper with the elections, but … to essentially overthrow the United States,” Vorhies said.

ALSO ON RT.COM‘Algorithms don’t write themselves’: Google whistleblower on Big Tech merging with politicsA document entitled “news black list site for google now” singles out nearly 500 websites to be hidden from users of Google Now, an Android application that was phased out in 2016 and replaced by the Google Feed; it is unclear whether the same blacklist is in effect for the app’s newer iteration. The document notes that some of the sites are censored due to “high user block rates,” and others for “peddling hoax stories.”

The list of throttled sites includes rightwing outlets the Daily Caller, the Drudge Report and the Gateway Pundit, as well as scores of smaller conservative pages. Left-of-center media sites also made the list, including Media Matters and other avowedly liberal blogs.

Based on one of the documents released by @Project_Veritas, @DailyCaller is on a blacklist for Google Now, Google’s android app. We don’t know much else yet, like when we were added or if it is still operative, but this is very concerning.

810 people are talking about this

Another document is headed “Fringe ranking/classifier: Defining channel quality,” indicating that Google’s search engine scores websites based on an unknown metric of quality or reliability. In the example shown in the document, the Wall Street Journal is given the highest ranking, while RT America appears halfway down the list, between Fox News and Brietbart.

Paul Joseph Watson of the fringe news site InfoWars, which also appears on Google’s blacklist, observed that he had difficulty finding his own YouTube channel in Google’s search results, despite using the keywords “paul joseph watson youtube channel.”

Yes, it’s totally normal that when you search “paul joseph watson youtube channel” on Google, my YouTube channel doesn’t even appear on the first page of results.

There’s no bias at all!

They literally broke their own search engine to censor me (and many others). 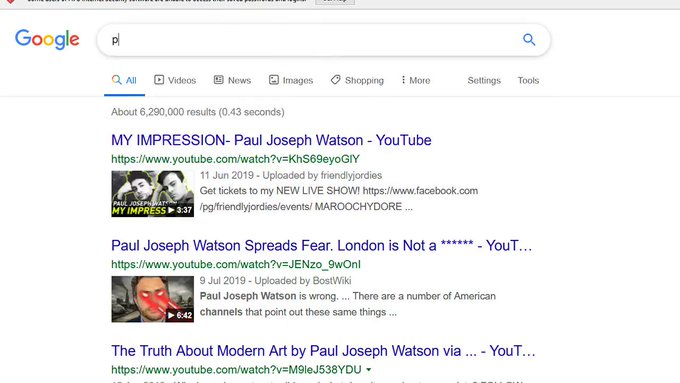 3,276 people are talking about this

Another leaked page appears to state that Google employs “human raters” to sift through videos on YouTube, a Google-owned platform, and flag them for “fake news & other fringe” content.

Vorhies called on other employees at Google to come forward with information, saying that “people have been waiting for this Google Snowden moment.”

“My message to those that are on the fence is: I released the documents,” Vorhies said. “I think that there’s a lot of engineers that have a hint that things are wrong, but they don’t understand the colossal scale that it’s at.”

ALSO ON RT.COM‘Why did they hide it?’ Pundits say Google ‘blacklisted’ pro-life entries before Irish abortion voteProject Veritas has published a number of exposés on Google’s surreptitious censorship practices in recent months, and has attracted a growing number of tech industry whistleblowers anxious about the company’s influence on the internet as a whole.

The media watchdog said Google has not responded to its request for comment.

Gorbachev says US decision to quit INF will result in ‘chaos’

India has over a billion Aadhaar IDs—including for dogs, spies, and even gods