Who would ever have thought it would be liberal students and activists leading the charge to have an anti-racism mural removed from public view at an institute of education?

That is the absurd situation that has arisen at one San Francisco high school, where an ongoing campaign to remove murals depicting the life of George Washington has resulted in a decision to have the art hidden from view. The school had earlier even considered destroying the work completely.

The mural, which includes images of slaves on Washington’s plantation and a slain native American figure has apparently “upset” students and is regarded by some as a “racist” painting. But there is a crucial distinction to be made here. The mural is not “racist” – rather, it depicts racism, and the two are very different things.

S.F. School Board Votes to Cover Controversial Mural Instead of Painting Over It

After a packed, heated meeting, the SFUSD Board reversed an earlier decision to paint over the mural George Washington High School in a 4-3 vote on Tuesday night.

The real irony is that the mural, painted by Russian-American artist Victor Arnautoff in 1936, was intended to send a subtle anti-racism message by depicting Washington as a slave owner, rather than presenting the typically sanitized version of his role in American history.

Arnautoff even chose to place enslaved African Americans and Native Americans at the center of many of the pieces in his Life of Washington murals, with white figures on the margins. Surely, this more truthful depiction of history is something progressives should be celebrating, not denouncing?

ALSO ON RT.COMUS school to hide, not destroy Washington mural depicting slaves and dead Native AmericanOne campaign group, Showing Up for Racial Justice (SURJ), has called for schools to be made more “culturally safe”and wants the murals removed. They claim that the art forces students to see violence and oppression against minorities as “unchangeable realities” – which is a gross distortion of the artist’s intention and a strange assumption for the group to be making on behalf of all students – particularly as most of the SURJ San Francisco members appear to be white.

School board president Steven Cook said the mural presents history that is “hard to see” and questioned whether a school was the appropriate location for the art to be displayed. One might plausibly argue that a school is in fact the very best place for educational art to be displayed.

ALSO ON RT.COMPrevious blackface wearers were punished for racism, Silverman was punished for satire. That’s worseUnfortunately, that fact seems lost on many today, who seem to care far more about shielding the populace from anything that might produce within them an“uncomfortable” feeling. In this particular case, isn’t that uncomfortable feeling which might be stirred up in the viewer really the entire point? Isn’t political art supposed to make us think? Or perhaps, from now on, we should we only permit art that evokes warm, gushy feelings of joy?

Black actor and San Francisco native Danny Glover has come out strongly against the school board’s decision to cover the mural, saying that American students aren’t taught enough truthful history as it is. He even compared the move to “book burning.”

In a statement to CBS affiliate KPIX, Glover said the mural serves as “a reminder of the horrors of human bondage” and “the mistreatment of native peoples.” Hiding it, he said, means “missing the opportunity for enhanced historic introspection.”

ALSO ON RT.COMActress Rosanna Arquette feels ‘shame’ at being born white; how exactly does that help minorities?Controversy over the murals has bubbled up before. Black Artist Dewey Crumpler was tasked with creating a “response”to Arnautoff’s work in the 1960s, at a time when many black students were also calling for the murals to be taken down.

Crumpler has defended the importance of Arnautoff’s work, explaining to Artnet News that “most students including myself never knew that George Washington owned slaves” because it was “never” something that was “brought up in history class.” The problem, he said, is that people are not taught how to read art critically and as a result, they look at images too “literally.”

“We have come to a place where art, unless it’s absolutely didactic, is without agency and without significance – and that becomes really a slippery slope that leads to a very dark place,” he said, adding that there are people “waiting in the wings” to take down other art and will use a case like this to justify it.

“Why board it up?” – Danny Glover on covering up George Washington High School mural. 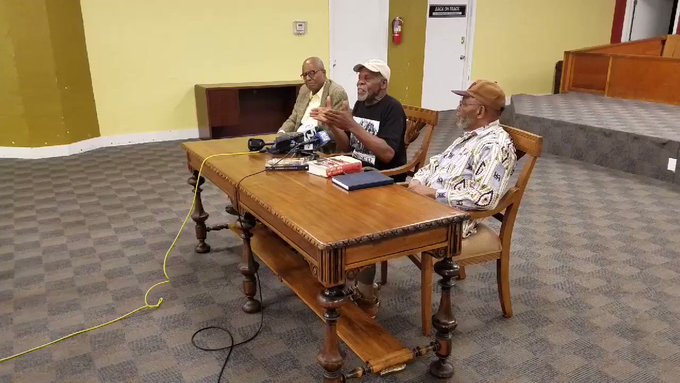 History is often “upsetting” and “hard to see” – but that does not mean we ought not to look. Those leading the charge to remove this art from view are not ridding the school of truly “offensive” imagery, they are serving to help whitewash history and doing a disservice to the students they claim to protect.

“If you run away from history, you’ll never change history. You have to confront history. Art is a teaching tool. That’s why every culture in the world uses it,” Crumpler said.

Why an Indian girl chose to become an American woman