“If sweetbreads and oxtail aren’t your thing, then don’t come here.” They are my thing, so I put a ring around the entry for Trattoria Agustarello in Testaccio in my 2005 Lonely Planet Italy. It wasn’t until a month or so later that I made it there, by which time I knew a bit about Testaccio, its second-century hill of broken terracotta pots and its graveyard of dead poets, its contemporary history as the slaughterhouse district and its particular cooking. The butchers and vaccinari (cow men) who worked the slaughterhouse from the 1880s until the mid-1970s divided animals into prestigious cuts for the wealthy, leaving the lower classes and slaughterhouse workers the offcuts and offal, the quinto quarto, or fifth quarter.

The slaughterhouse may have closed in 1975 and habits are changing, but, in Testaccio, quinto quarto cooking is still alive, and nowhere more than in Trattoria Agustarello. There have been small adjustments to the half-open kitchen and the walls are now a sunny yellow, but apart from that, Agustarello feels much the same as it did the first time I went, 13 years ago. 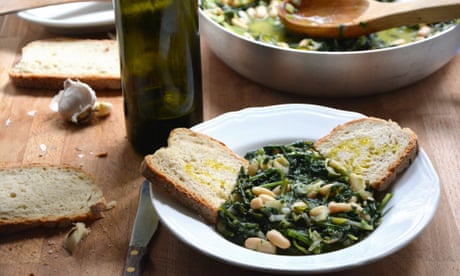 Also defying the years is chef/owner Alessandro, who like his father before him, smokes slim cigars and cooks a menu where – as the Lonely Planet noted – “virtually every dish (other than pasta) in this old-fashioned trattoria has some correlation to the innards of an animal”.

If offal is not your thing, I doubt you’ve read this far. If it is, and you like tripe cooked in tomato with mint and pecorino cheese, or oxtail simmered with celery, tomato and red wine until it’s the colour of a horse chestnut and falling from the bone, or enjoy the crunch of veal cartilage (think chicken cartilage only better) with pickled vegetables, then Agustarello is the place for you.

It is also a place to enjoy classic Roman pastas – gricia, carbonara, amatriciana – whose form and deep flavour comes from guanciale (cured pig cheeks), bitter tangles of twice-cooked cicoria or chicory, braised artichokes and a vignarola, or Roman spring stew of broad beans, artichoke and peas that laughs like Jack Nicholson in the face of my bright green version. It is not food I would want to eat all the time, but food I want to eat sometimes.

Alessandro also makes the most delicious fagioli e cotiche, beans and pork rind, which I might not have ordered were it not for the fact that I thought cotiche was sausage (that would be cotechino, the new-year treat that does contain a proportion of pork rind). To make it, pork rind (about 130g, hairs burned away, and trimmed of all but a couple of millimetres of fat) is boiled in water for 15 minutes, drained, cut into one-inch-wide strips and then boiled again in clean water until tender, which takes about an hour and a half.

The rind is then cut into 2mm-thick matchsticks, and mixed with tomato sauce, a little water and cooked cannellini or borlotti beans, then simmered until the sauce is rich. The combination of the beans, sauce and pork rind is a dish that is thick, rich and delicious, and – with bread and plenty of red wine – a good thing if it is your sort of thing.

Serves 4
300g dried cannellini or borlotti beans, soaked in water for at least 12 hours
120g pork rind, with all but 2mm of fat trimmed away
Olive oil
1 small onion, peeled and diced
1 garlic clove, peeled and diced
A sprig of parsley, stem and leaves finely chopped
300ml tomato passata (or a tin of tomatoes passed through a food mill)
Salt and black pepper

Cook the soaked beans in plenty of water until it boils, then reduce to a steady simmer until tender – about an hour depending on the beans. Set aside to cool in the cooking water.

Meanwhile, cover the pork rind with water, bring to a boil for 15 minutess, then drain. Cut the rind into one-inch strips and cover with clean water. Bring to a boil, then reduce to a lively simmer until very tender – about an hour and a half. Drain the rind. Once cool enough to handle, slice the rind into matchsticks 3mm wide and one inch long

In a large, heavy-based pan over a medium heat, fry the onion, garlic and parsley in a little olive oil until soft and translucent, then add the tomato, salt, pepper and a small glass of water. Simmer for 10 minutes, then add the cooked, drained beans and pork rind, and simmer for another 15 minutes.

Is Jimmy Anderson the GOAT? Who cares, just enjoy him while you can

Everything you need to know about the new 1.5°C climate-change report

The future of birth control in India could be the needle