SpaceX is set to launch its seventeenth mission of the year tonight to put an Argentine satellite into orbit.

The satellite, called SAOCOM 1A, will be operated by Argentina’s space agency, CONAE, and use radar sensors to track soil moisture and other indicators that help farmers decide when to plan and irrigate crops, predict pestilence, and even predict natural disasters like floods.

The launch and an attempt to land the rocket booster will be live-streamed by the company. You can watch here starting about fifteen minutes before the scheduled lift-off at 7:21 pm PT (10:21 PM ET).

To put the roughly 3,000 kilogram satellite into space, Elon Musk’s team will re-use a Falcon 9 rocket booster that flew for the first time in July, 2018. It is one of the company’s “Block 5” Falcon 9 rockets—the final evolution of the vehicle before the company’s designers turn to a new rocket that may carry a billionaire tourist to the moon. 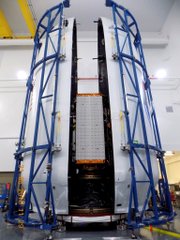 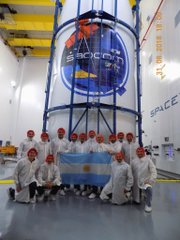 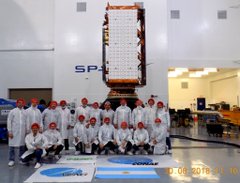 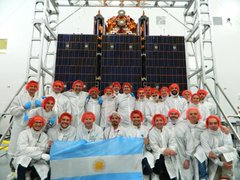 Realizing big dreams, however, requires executing the more prosaic business of flying satellites into orbit as cheaply as possible. That’s why SpaceX developed the world’s only operational reusable rocket, which lets the company offer deep discounts to its customers. There is still a ways to go before the company reaches the goal of flying the same rocket twice in 24 hours; so far, the company’s fastest turn-around is eleven weeks.

There will be some progress on that front: After this launch, engineers will attempt to land the booster on a landing pad near the launch site at Vandenberg Air Force base. This will be the first time the booster is returned directly to its west coast base rather than landing on an off-shore autonomous drone ship. (SpaceX has landed Falcon 9 boosters on ground pads at its Cape Canaveral launch site several times.)

Returning the booster straight to the launch site means a faster turnaround for reuse; the vehicle won’t need to be floated back to shore, loaded on a truck and carried to the launch site. But because the landing site at Vandenberg is just half a kilometer from the launch site and its expensive infrastructure, precision is a must.

SpaceX needs one more launch to tie its record of eighteen orbital missions, set last year. The company is on pace to exceed that number in 2018, but it will be difficult to meet the goal of 24 or more launches set by  management. Still, the company is likely to launch more rockets this year than any other country or rocket-maker but China.

At least one planned launch is expected to be pushed into next year: An uncrewed demonstration of the company’s new Dragon spacecrafthas slipped from December 2018 into January 2019. SpaceX is now expected to carry US astronauts to the International Space Station for the first time in June 2019. The company’s partnership with NASA to safely carry humans into space from US soil for the first time since 2011 promises to be the culmination of all the work that goes into making launches like today’s routine.

‘In Dagestan, you have to fight for respect’ – meet Nurmagomedov Jr.