The US Senate confirmed Brett Kavanaugh’s nomination to the Supreme Court nomination today (Oct. 6), in a 50-48 vote, solidifying a conservative majority on the nation’s highest court. Ahead of the vote, Senate majority leader Mitch McConnell told the Washington Post (paywall) the outcry against Kavanaugh had helped the Republican party.

“It’s been a great political gift for us. The tactics have energized our base,” McConnell said. “I want to thank the mob, because they’ve done the one thing we were having trouble doing, which was energizing our base.” In remarks on the Senate floor before the vote commenced, McConnell said voting for Kavanaugh would end “this brief, dark chapter” in history. 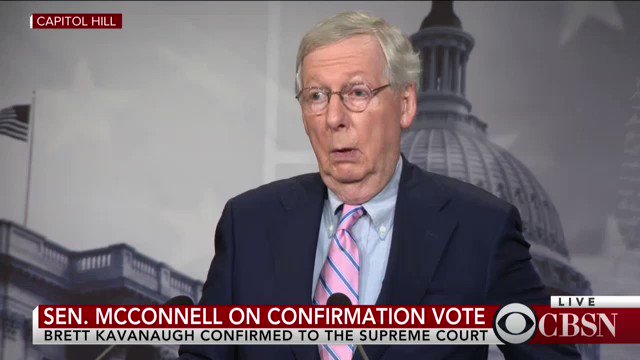 Senate Majority Leader Mitch McConnell after Senate confirms Kavanaugh: “It certainly had a good impact for us. Our base is fired up. We finally discovered the one thing that would fire up the Republican base. We didn’t think of it, the other side did it.” https://www.cbsnews.com/live-news/brett-kavanaugh-vote-live-stream-senate-confirmation-today-2018-10-06/ …

The bitter, polarized fight to confirm Kavanaugh has appeared to push House races toward Democrats, while improving odds that Republicans maintain control of the Senate, the Post reported (paywall). Suburban women are expected to determine the outcome of House races, and that group has largely been sympathetic to Christine Blasey Ford, the woman who testified that Kavanaugh sexually assaulted her when the two of them were teenagers.

Trump has fanned the partisan flames, defending Kavanaugh, mocking his accusers, and casting doubt on the millions of women and survivors of sexual violence who protested Kavanaugh’s nomination.

Democrats risk losing Senate seats in Indiana, Missouri, and Montana, and failing to pick up seats once seen as competitive. Senator Heidi Heitkamp, a Democrat from North Dakota who voted against Kavanaugh, fell behind her Republican opponent in recent polling. Heitkamp’s campaign raised nearly $4 million in the third quarter, and reportedly raised over $400,000 in 24 hours after senator Kamala Harris sent a fundraising email praising her “no” vote on Kavanaugh.

Republicans appear weaker in the House—68 races are viewed as competitive by the Cook Political Report—and in gubernatorial contests. Democrats need to pick up 23 seats in the House to assume the majority. They would need two seats in the Senate to do the same there.

As battlegrounds shift, the Republican party has pulled spendingfrom several districts where its House candidates appear unlikely to win, including that of Keith Rothfus, who faces a strong challenge from Democrat Conor Lamb in a left-leaning district of Pennsylvania. Democratic candidates also lead in five key House races in California, according to recent polling from the University of California-Berkeley’s Institute for Governmental Studies.

A good keyboard is the ultimate workplace luxury

Get short URL China to make it rain over area 3 times the size of Spain © Rick Stevens © Reuters 771710 Follow RT onRT Since 2013 China has been creating 55 billion tons of artificial rain a year. The country is now embarking on its biggest rainmaking project ever. In terms of the plan, announced this month, Chinese authorities intend to force rainfall and snow over 1.6 million sq km (620,000 sq miles), an area roughly three times the size of Spain. According to media reports, the government will use new military weather-altering technology developed by the state-owned China Aerospace Science and Technology Corporation. The country plans to build tens of thousands of combustion chambers on Tibetan mountainsides. The chambers will burn a solid fuel, which will result in a spray of silver iodide billowing towards the sky. RT ✔ @RT_com ‘Hanging gardens’ of China? ‘Forest towers’ to tackle country’s pollution problem (PHOTO, VIDEO) https://on.rt.com/82oc View image on Twitter 113 2:25 AM – Feb 9, 2017 Twitter Ads info and privacy 97 people are talking about this “More than 500 burners have been deployed on alpine slopes in Tibet, Xinjiang and other areas for experimental use. The data we have collected show very promising results,” an unnamed researcher told the Morning Post. “Sometimes snow would start falling almost immediately after we ignited the chamber. It was like standing on the stage of a magic show,” he said. The Tibetan plateau is vital to the water supply for much of China and a large area of Asia. Its glaciers and reservoirs feed the Yellow, Yangtze, Mekong, and other major rivers that flow through China, India, Nepal, and other countries. Sprayed from planes, the particles will provide something for passing water vapor to condense around, forming clouds. Those clouds will bring the rain. A single cloud-seeding chamber could create a strip of clouds covering a 5km area. RT UK ✔ @RTUKnews Money from thin air: British breeze sells for £80 a pop in China http://on.rt.com/73qm View image on Twitter 40 1:46 AM – Feb 6, 2016 Twitter Ads info and privacy 40 people are talking about this Traditionally, the rainmaking process or “cloud-seeding” means rocket-launching chemicals into clouds which accelerate the creation of ice crystals that eventually become rain. China also uses military aircraft for those purposes. Rainmaking is also a popular way to “clean up” air in China, where heavy smog is a big problem for many cities. The practice of weather modification has become more frequent across the country in recent years, including for major public events. In 2008, China launched over 1,100 rockets containing silver iodide into Beijing’s skies before the Olympics opening ceremony to disperse clouds and keep the Olympics rain-free. Beijing has a “development plan” for weather modification until 2020. For more stories on economy & finance visit RT’s business section 771710 Follow RT onRT social FOLLOW RT ON YOUTUBE FROM OUR PARTNERS China to make it rain over area 3 times the size of Spain China launches global yuan payment system