Iwas standing next to Marta. We were both picking up heavy bedsheets and feeding them into the mangle. I saw the pain each movement brought her – the laundry was heavy, and I knew she was ill: one of her intervertebral discs was inflamed. The previous week, after she had visited her doctor, our boss had told her she couldn’t take any sick leave as there weren’t enough workers.

“Does it hurt a lot?” I asked, concerned. “I’m thinking about what I’ll cook tonight,” she said. Despite the pain, her greatest worry was feeding her child. Marta works in the laundry room of a large Czech hospital, earning the minimum wage (11,000 Czech koruna, or about £385 a month). As she is paying back accumulated debt from the past, her net monthly income is about 9,000 CZK. She pays 20,000 CZK in rent. The state provides her with a widow’s pension, an orphan’s annuity for her child and a housing subsidy. All this just about covers the rent. Despite Marta’s hard work – sometimes up to 11 hours a day – she keeps falling further into debt.

In the media, we read repeatedly that people should take care of themselves – never that someone else should help them

Exhaustion, heavy physical exertion, desperation. That’s how I’d describe what I saw when, for six months, I worked in five different manual low-paid jobs in the Czech republic as an undercover reporter. My aim was to discover the conditions under which people in my country work in unqualified positions and for low wages. As well as the laundry, I also tried my hand at a poultry processing plant, a supermarket till, a factory assembly line and, finally, separating rubbish for recycling. My journalistic project was titled “Heroes of capitalist labour”. These were people living on the edge.

This is Europe: stay close with the Guardian’s email updates

Most were afraid to speak out for fear of losing their job. At the poultry plant, employees often worked many hours of overtime in a temperature of 8C. At times, they went for more than six hours without being allowed to drink, eat or rest. Karel, a colleague of mine, used to work as a roof tiling contractor – a sole trader. He got into debt, partly because he didn’t fully understand the administrative part of his job. With all his overtime and night shifts, he made about 15,000 CZK a month at the plant. But after paying down his debt, he only pocketed about 8,000 CZK. He never complained – on the contrary, he was grateful, always repeating: “At least they pay for my health insurance and social security.” When we met, his small house had just been repossessed. Desperate for a place to go, he considered suicide.

“At least we have a job,” I would hear again and again as soon as we started talking about labour conditions among work colleagues. Never mind the fact that some people around me worked 12-hour days on a regular basis – sometimes 14, sometimes even 17. That’s just how it is – you’re meant to be glad that you even get the opportunity to work.

A strong distrust of politics, however, was noticeable. Almost none of my colleagues voted – just occasionally I would speak to someone who was a Communist party supporter. The transformation of the economy after 1989 was based on cheap labour and incentives for foreign direct investment. There has been an unwillingness to address the growing number of problems this brings. In the media, we read again and again that people should take care of themselves – never that someone else should help them.

The Czech transformation from state socialism to capitalism is often considered a success, and today all the economic indicators suggest the country is thriving. But subjective experiences tell a different story. The individual narratives of those in need aren’t presented as systematic problems of an entire society. The achievements of the welfare state were often seen as interchangeable with communism, and trade unions were mocked as relics of the old regime. For years, collective bargaining was practically a swearword. So it became quite common for low wages to be accompanied by blatant violations of the labour code, which employees put up with for fear of speaking up. With the endless repetitions of “everyone’s out for themselves”, Czech society gave up on solidarity.

In recent years liberal elites began telling people they ought to show solidarity with refugees. This created a problem. Czechs didn’t understand why they should feel solidarity with people from somewhere in Africa, given that no one took any notice of their own problems.

For a long time, the “wage curtain” didn’t interest politicians in western Europe either – but every Czech knows that a shop clerk in Germany or Austria will make three times as much as one in the Czech Republic. Housing and food, however, aren’t massively cheaper compared with the west. The working poor, who too often cannot get by with their wages, find themselves consumed by a deep feeling of injustice. They believe they have been left behind. 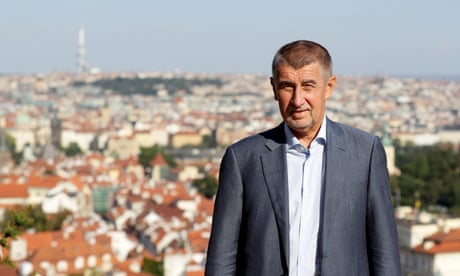 In most regions across the Czech Republic, it’s not difficult to find work these days. The problem is that many people can’t make a living from that work. Social housing is practically nonexistent, and the state contributes only a little towards housing costs. At present, there are 750,000 people in long-term debt, and the bailiffs – private individuals with a licence for debt collection – take so much from their monthly earnings that they cannot afford to pay rent.

This also has an influence on their families. According to Social Watch, debt collection affects 2.5 million people, almost a quarter of the country’s population. The state doesn’t compensate for any loss of wages, nor does it pay the debts. Rents are rising rapidly. The greatest stress factor is the fear of losing one’s home. For those with children, this also means fearing that the state will take them away, given the parents’ situation. Many poor people live in unhygienic temporary accommodation.

And while I could dream of giving myself the reward of a holiday with my husband and children during my six-month experiment, one of my colleagues from the laundry who lived in temporary accommodation could only dream about saving up enough for an underground ticket so he could have a bit of cake in the city. “I managed to do it once before,” he told me excitedly, “I took a picture with the cake, so I could have a memory of the good life.”

• Saša Uhlová is a Czech journalist

‘Bitch tried to hit me’: Umpire separates Stephens and Pavlyuchenkova in stormy match

Celebriphilia epidemic sweeps US: Forget knowledge & wisdom, get guidance from the stars