Conversations on the campuses of Google, Facebook, and other tech giants in Silicon Valley are pushing an idea labor experts once dismissed as outlandish. Hundreds of well-paid engineers and product managers at some of the world’s most powerful companies are talking about unionizing.

No group of technology employees at the tech giants have filed for formal recognition yet, according to interviews with the AFL-CIO. Facebook, Uber, and Google would not comment on union-related discussions with staff. Yet groups born out of resistance to US president Donald Trump are aggressively advancing the idea. “In the last few weeks, interest and curiosity in unions and labor organizing has definitely ramped up,” said an organizer of the Tech Workers Coalition, a grass-roots activist group founded in 2015, with members from Silicon Valley’s largest companies. “Tech CEOs will be cozy with Trump until it affects their bottom line, or ability to keep employees,” she said.

Silicon Valley’s attitude toward unionizing has vacillated between disdain and outright hostility. Robert Noyce, co-founder of Intel, once argued “remaining non-union is essential for survival for most of our companies. If we had the work rules that unionized companies have, we’d all go out of business.” Atari workers tried but failed to unionize in 1982 and 1983, and Apple’s retail stores’ employees never saw their union take shape (although won wage concessions). Recent efforts by blue-collar workers to unionize at technology companies, while successful, have not inspired their professional peers.

But tech workers’ opposition to Trump’s agenda, especially his allusion to building a Muslim database in the US, spurred a nascent movement to organize as a way of delivering their message to Silicon Valley’s boardrooms. Tech Solidarity, a grass-roots organization for tech workers, founded last November, has made it one of their core objectives. “Our goal is collective action by employees,” says Tech Solidarity founder Maciej Ceglowski who asserts employees’ ability to walk out the door (and into one of the 223,000 open job positions for software engineers in the US) is their most powerful weapon against companies collaborating on dubious government polices from immigration to surveillance.

Hundreds of people have flocked to Tech Solidarity’s meetings held in more than a dozen major cities across the country. Ceglowski has called for management to “fear” their employees, and is actively recruiting managers from Google and Facebook. The software developer and Pinboard founder is embarking on a long-term effort to force social and economic reforms within the tech industry. “So far, we have been totally silent and acquiescent,” he said. “We want people to be afraid of the political power of their employees.”

A voice to oppose Trump

Silicon Valley seems a world away from organized labor’s strongholds in factory towns like Chicago and Detroit. Unions emerged in response to individual workers’ inability to negotiate better ”wages, hours and working conditions” with owners of the industrial economy. Tech workers, by contrast, enjoy more leverage over their employers than almost any other class of worker.

The difference is simple supply and demand. There are far fewer experienced software engineers than job openings, and most command salaries about triple the US median on average. Training and replacing developers is as difficult as finding them, so companies go to extraordinary lengths to keep them. Hence the open bars, posh recreational rooms, and hot tubs on many tech campuses (as well as illegal collusion by Google, Apple, Intel and others to cap wages by not hiring away each others’ staff).

A Silicon Valley union, by contrast, would probably not put wages as its center.  Tech Solidarity and others see unions as a way to achieve their real goal: a right to decide if their company is living up to the ethical standards of its workforce. Inevitably, those values translate into politics.

The second reason why Bay Area elites could prove ripe for unionizing is the culture. Silicon Valley techies bring their politics in their work like nowhere else. Generous salaries are only the first gambit to attract the best talent. To win, companies must sell themselves, in Valley parlance, as the place you go to make the world a better place. From Google’s “Don’t be evil” to Tesla’s mission to slow climate change, tech workers often demand their employers’ ideals, at least officially, match their own.

“We live in this place where we want to save the world,” says Optimizely software engineer Brad Taylor, whose Facebook post urging tech workers to organize went viral in late January, leading to the formation of Tech Against Trump. “But it’s very disheartening to see our leaders who we look up to not stick up for the same values they talk about. Eventually, you’ll see engineers vote by who they work for.”

Tech campuses have seen waves of protests in recent months. Trump’s unpopularity before the election (workers at tech giants sent 97 cents of every dollar in political donations to Democratic presidential nominee Hillary Clinton) has only intensified. Tech workers who never attended a political rally in their lives are now speaking out, protesting, and even quitting to oppose corporate collaboration with parts of Trump’s agenda. 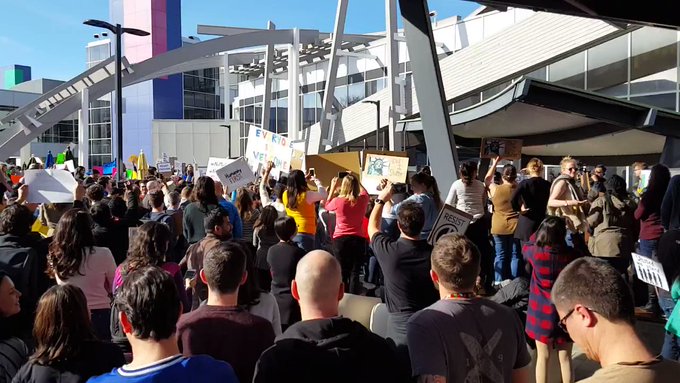 So far, the resignations have only trickled in. Oracle and IBM have both seen employees publicly depart over their executives’ accommodations to Trump, although not in any great numbers. Shopify lost one developer who cited its willingness to permit the right-wing news site Breitbart to use its service for online shopping.

The blowback was most intense at Uber. CEO Travis Kalanick was pilloried for the perception that he was giving tacit support to the Trump Administration. His role on a Trump economic and policy advisory council (along with other executives such as Tesla’s Elon Musk), as well as the charge that he undermined a taxi strike protesting Trump’s initial immigration ban, prompted a #DeleteUber campaign on social media. The fallout triggered a company-wide meeting at which employees told the CEO about the “personal cost” of working at Uber given the stigma attached to Kalanick’s perceived support for Trump, according to The New York Times. “What would it take for you to quit the economic council?” at least two employees asked at the Jan. 31 meeting. Kalanick stepped down on Feb. 2.

A professional approach to organizing

Will it work for software engineers? “I think it’s not only not crazy, it makes a lot of sense,” says Lawrence Mishel of the Economic Policy Institute, a pro-labor think tank in Washington DC. Although labor union membership peaked in 1954 at 35% of US workers, sinking to just 10.7% of the workforce today, there is a bright spot in the data: professional workers.

More than 6 million professional and technical workers are now in unions, more than half of them in computer-related professions such as software development, information technology, and computer science, according to Census Bureau Current Population Survey data compiled by the AFL-CIO.

Professional unions are now the fastest growing segment of the AFL-CIO, approaching 6% of the total US workforce. “We’ve seen the trend lines for last 15 years and they’re going up,” says Paul Almeida, the head of the AFL-CIO’s professional employee department.

Unions are now starting to resemble the workforce itself. The US has shed 7 million manufacturing jobs in the last four decades. The need for workers who operate computers has eclipsed those who need to manage heavy machinery, especially in factories where automation is ascendent. White-collar priorities like workplace flexibility and decision-making are rising concerns alongside wages for unions, report AFL-CIO member surveys. Union workers have fought for their members’ politics before: the AFL-CIO lent support for the Vietnam War (before backing away), and unions marched regularly with Martin Luther King Jr. who considered many of them allies.

That said, convincing a meritocracy-minded band of engineers and technologists in Silicon Valley to sign up for an institution designed for 20th-century assembly lines seems far-fetched. But Stan Sorscher disagrees. A physicist and former Boeing engineer, Sorscher represents 22,650 professionals in SPEEA, an aerospace union. He sees parallels between Trump’s roiling of Silicon Valley and Boeing engineers’ decision to strike in 1999 over wages and working conditions, the longest, biggest white-collar strike in American history.

“That was a radicalizing, transformative experience for most of the members,” he said. It’s something the protests against Trump may be doing for California’s tech community. ”If workers can get organized somewhere in Silicon Valley, they can bring a legitimate view to the table and claim political power,” said Sorscher. “The most thrilling thing an organizer can do is get people out in the street, and then convert that into real power.”

No one knows if there’s enough momentum. But Trump’s first executive order banning immigration, an affront to Silicon Valley’s global workforce, unified it against the White House in a matter of days. CEOs spoke out at protests on company’s headquarters and joined demonstrators at the airport. Tech companies rushed en masse to sign amicus briefs opposing the orders.

To turn this into concerted action, says Sorscher, tech workers must settle on an organizational model to act collectively. Trump has crystalized many tech workers identity as an opposition, but a representative organization is still emerging. Sorscher says a union was right for SPEEA when it started in the 1940s, but a different structure such as a professional association may be right for Silicon Valley. Regardless, he said, political power rests in a group’s ability to articulate its demands, coordinate members and deliver a message. The results will follow.

As Trump’s policies force the workforce to confront its own role in building tools for US surveillance and technology to enact other policies, a nascent sense of common identity is emerging. Something may have to give. Pressure is quietly being exerted on executives by some of the most powerful employees inside companies, says Valerie Aurora, an activist who signed on to the NeverAgain.tech pledge with 2,843 signatories in the technology industry.

“They are the people who, if they aren’t doing their job in minutes or hours, the company starts losing vast amounts of money,” she said. “These are the people with pagers. These are people who are saying, ‘Hey, Mr. CEO, we’d like you to know what what our opinions are.’”

The rise of the silent meeting